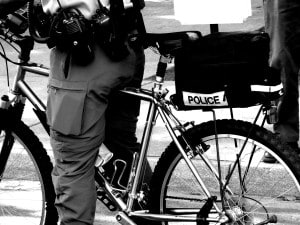 In an unpublished opinion, Milwaukee police officers conducted a traffic stop on a Chevrolet van in June 2013. According to police, the van was stopped because it had a broken tail light and smelled of burning marijuana. One of the officers apparently ordered a passenger to exit the vehicle and patted him down before requiring the man to sit on a nearby curb. After conducting a search for outstanding warrants, police learned the passenger was on probation related to a prior drug conviction.

Next, the Milwaukee officers asked the passenger if he had any marijuana in his possession. The man allegedly stated he did not because he and the driver “smoked it all up.” Since the passenger purportedly claimed to have ingested the drug, the officers placed him under arrest for violating the terms of his probation. Police then conducted a search of the man’s person and reportedly found a baggie of heroin in the passenger’s pants. The passenger was subsequently charged with possession of a controlled substance with intent to deliver it.

At trial, the passenger moved to suppress the physical evidence obtained as a result of the traffic stop. The man testified that he did not admit to smoking marijuana, and police did not find drugs on him during their initial search. In addition, the man stated he remained on the curb without any sort of restraint. The trial court then found that the police officer’s testimony was more credible than the defendant’s and stated the only issue in the criminal case was whether Milwaukee police acted within the parameters of the law.

The trial court ultimately determined that both the traffic stop and the passenger’s detention were lawful. The court also ruled that the man’s statements provided police with probable cause to arrest and search him. Since the alleged drug evidence was discovered in a search incident to the defendant’s arrest, the trial court found that it was admissible at trial. The defendant then entered a guilty plea.

In response to the five-year prison sentence that was imposed by the court, the defendant filed an appeal with District I of the Court of Appeals of Wisconsin. On appeal, the man claimed the lower court committed error when it denied his motion to suppress the drug evidence uncovered during the traffic stop. After stating that the Fourth Amendment to the United States Constitution and Section 11 of the Wisconsin Constitution protect citizens from unreasonable search and seizure, the appeals court said it was required to defer to the trial court’s assessment regarding witness credibility. The court added that it would independently review constitutional principles.

The Wisconsin Court of Appeals next found that the defendant’s constitutional rights were not violated because he admitted the smell of marijuana was emanating from the van. According to the court, the marijuana smell provided Milwaukee police with probable cause to search the vehicle. The appellate court also rejected the defendant’s assertion that the police officer lacked authority to order him out of the van and stated it was reasonable for police to require him to remain at the scene of the traffic stop while the vehicle was searched. As a result, the Court of Appeals held that the trial court did not err when it refused to suppress the drug evidence and affirmed the trial court’s decision.

If you are accused of a drug crime in Wisconsin, you should contact the law offices of Reddin & Singer, LLP online or give us a call at (414) 271-6400. Our experienced Milwaukee criminal attorneys may also be reached using our phone number (414) 271-6400.