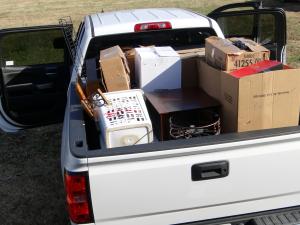 The United States Constitution permits a law enforcement officer to temporarily detain a citizen for investigative purposes. Sometimes, however, police in Wisconsin and elsewhere go too far and violate an individual’s rights. In an unpublished case, a sheriff’s deputy made an early morning traffic stop in an unmarked vehicle. According to the deputy, he noticed a white pick-up truck come to a complete stop at a traffic intersection for about 10 seconds around 3:30 am. After noticing there was no other traffic at the intersection, the officer pulled over into a gas station and allowed the truck to pass. Because he could not see a license plate on the back of the pick-up, the officer apparently decided to follow the man. Before long, the truck pulled over without being signaled to and attempted to park in a snow-covered highway shoulder.

According to the deputy, he parked behind the truck and turned on his emergency lights. The officer testified that he noticed temporary Colorado tags in the rear window of the vehicle as he walked up to the truck. After that, the deputy apparently asked for the man’s driver’s license and spoke with him regarding why he was stopped at the intersection for longer than normal. In addition, the officer asked the driver for paperwork to prove he recently purchased the pick-up. The deputy stated he spotted an open liquor container and a glass pipe inside of the truck when the motorist opened the armrest to look for the requested paperwork. Upon further inquiry, the driver allegedly admitted to the deputy that he possessed marijuana.

As a result of the traffic stop, the driver was arrested and charged with several drug crimes. Prior to trial proceedings, the defendant filed a motion to suppress the evidence that was acquired during the traffic stop. According to the defendant, the traffic stop violated his right against unreasonable seizures under the Fourth Amendment to the U.S. Constitution. The circuit court found that the deputy’s reasonable suspicion to stop the driver was dispelled when the officer saw the temporary tag in the truck’s back window. Because the deputy continued with the traffic stop, the court held that the officer’s conduct violated the defendant’s rights and granted his motion to suppress the evidence obtained as a result.

Next, the State of Wisconsin appealed the circuit court’s order to the Court of Appeals of Wisconsin, District IV. After stating the Fourth Amendment protects citizens from unreasonable search and seizure, the appellate court said it does not prohibit a law enforcement officer from detaining an individual temporarily for investigative purposes. The court added that the circuit court’s factual findings would be upheld unless clearly erroneous. The Court of Appeals then examined each of the parties’ arguments.

If you or someone you know was the subject of a search or seizure without a warrant, you should consult with an experienced Milwaukee criminal defense attorney who can assess your situation and make sure police conduct was within the parameters of the law. To learn more about your rights and options, please contact the law offices of Reddin & Singer, LLP through our website or give us a call at (414) 271-6400. We may also be reached through our phone number (414) 271-6400.