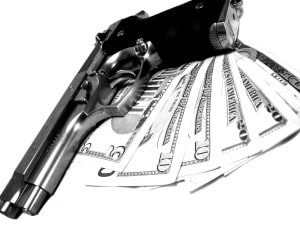 In United States v. Jackson, a man was pulled over by a Milwaukee County Sheriff’s Deputy regarding the dark tint on his vehicle windows. As the law enforcement officer approached the man’s vehicle, the Deputy allegedly smelled marijuana. As a result, the officer asked the man and his passenger to exit the vehicle and conducted a search for drugs. After opening a can of degreaser, the Deputy apparently uncovered two baggies of marijuana. After that, the driver was apparently handcuffed and placed in the officer’s vehicle.

According to the Deputy, the man willingly answered questions without an attorney present while being recorded. During their conversation, the man admitted to having marijuana in his possession. The man also supposedly told the officer he had weapons used for protection at his residence. After questioning both the man and his passenger, the Milwaukee County Sheriff’s Office obtained a search warrant for the man’s home. When the warrant was executed, the officers allegedly found more marijuana, two guns, and cash.

Next, a grand jury issued an indictment against the man. As a result, he was charged with being a felon in possession of a firearm, possession of marijuana with intent to distribute the drug, and maintaining a “drug-involved premises” under 21 U.S.C. § 856(a)(2) in the Eastern District of Wisconsin. The defendant then filed a motion to suppress the evidence obtained by the Deputy as well as a request for both a Franks and an evidentiary hearing.

According to the defendant, the Deputy did not have probable cause to conduct a traffic stop or search his automobile. He also claimed the government submitted false information in support of its application for a search warrant and argued his statements following the traffic stop should “be suppressed as fruit of the poisonous tree.” In response, the United States maintained that the man failed to meet his burden for either requested hearing.

First, the Eastern District of Wisconsin denied the defendant’s motion for a Franks hearing without prejudice because the man failed to offer witness testimony in support of his motion, nor did the defendant provide a sufficient explanation regarding why he did not furnish the court with an affidavit. Because of this, the federal court said he did not make a “substantial preliminary showing” in support of his request.

After that, the court stated an evidentiary hearing is held on a motion to suppress when a defendant asserts specific and detailed facts that are sufficient to justify relief. According to the court, the defendant failed to present any evidence to indicate that police lacked probable cause to conduct a traffic stop based on his dark vehicle window tint. The court also held that the defendant did not offer adequate evidence to indicate the Deputy did not have probable cause to search his vehicle.

If you are facing charges related to a drug crime in Milwaukee, you are advised to contact the law offices of Reddin & Singer, LLP online or give us a call at (414) 271-6400. Our knowledgeable attorneys may also be reached using our phone number (414) 271-6400.